The consultation for Oxford’s latest traffic plan closes today (13th October). The plan envisages six ANPR-enforced traffic filters across the city, but with so many exemptions (including vans and HGVs, plus private cars up to 100 days per year per resident) that the result is expected to be only a 20% cut in traffic, or 35% in the very centre. 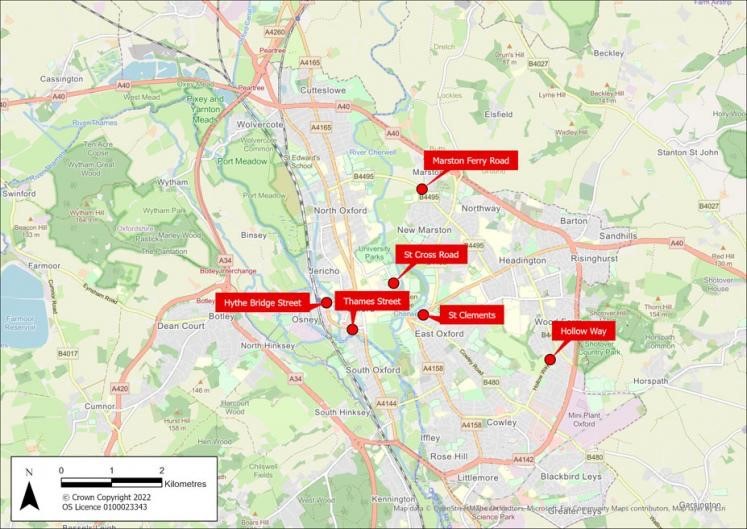 Cycling groups have largely lined up behind it. The phrase “the perfect is the enemy of the good” has been heard more than once. As someone who has been saying exactly that for 18 years about the map I’ve been building, I can get behind that sentiment. The problem is I’m not convinced that the plan is even “good”.

It’s certainly well intentioned. Oxford’s congestion problem is unsustainable; so too is the number of fatal accidents on the city’s roads. The county council deserves praise for at least trying to tackle the issue.

Especially because many of the problems are not of its making. They are, to be honest, largely the fault of Oxford City Council. Approving the Westgate centre and a massive, cheap car park in central Oxford was the most obvious failure. A close second was allowing Barton Park to go ahead without a Park & Ride for the John Radcliffe Hospital: an electric shuttle bus for the half-mile journey should have been a no-brainer. The failures continue to this day: the housing-light masterplan for Oxpens; the decision to repair the Gasworks Pipe Bridge on its original site, when there was an opportunity to create a direct cycle superhighway link from Marlborough Road to Butterwyke Place.

So I do sympathise with the county council. These are Hard Problems. But I see four particular problems here, and OCC’s plans only solve one of them.

Let’s start with the one they do solve. Oxford’s buses are caught in congestion. They are unreliable and slow. The Oxford Bus Company says that the traffic filters will be enough to fix this. They are a bus company. I am not (I have managed to resist going on eBay and buying a Routemaster). I am presuming they know what they are talking about. So, tick.

Every Saturday, the Botley and Abingdon roads (and, in turn, the city centre) are snarled up by traffic heading for the plentiful, cheap parking at the Westgate centre.

The six filters include one between Abingdon Road and the Westgate (on Thames Street). Access from Botley Road will be unchanged.

The inevitable result is that all the Westgate traffic will be funnelled down Botley Road. This is… not a good thing? For buses, cyclists, local residents, anyone really. I guess if you live on Abingdon Road it’s good news.

The recent tragic deaths of cyclists have involved HGVs (or, in one case, a bus) at junctions. HGVs, vans, and, of course, buses will all be exempt from the traffic filters. Nothing will change here.

More broadly, if we assume a 20% reduction in traffic across the city, the inner radial roads – Cowley Road, Banbury Road, Iffley Road – all still have a daily motor vehicle count in the 8000-11000 region. Applying the higher 35% reduction for Magdalen Bridge gets us to 10000 motor vehicles. These are all well above the 5000 vehicles that LTN 1/20 recommends as the cut-off point for protected cycle tracks:

We are not being offered protected cycle tracks. Oxford, alone, persists with painting lines on roads, a strategy which has nowhere achieved Dutch levels of cycling. (If you know otherwise, answers in the comments?) People won’t cycle until cycling is made safe.

Countless studies have shown that cycling is most attractive for trips 3km or less: 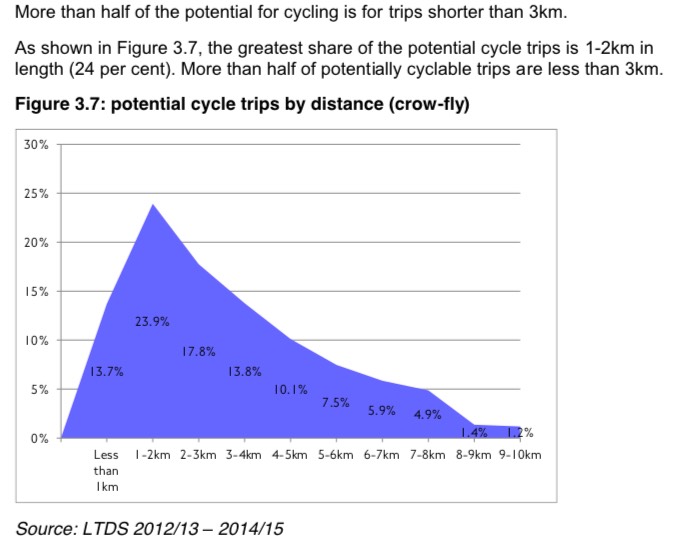 In this plan, everyone who lives within 3km of the city centre gets a free car pass through the filters (100 days per year, so probably 200 for most households). 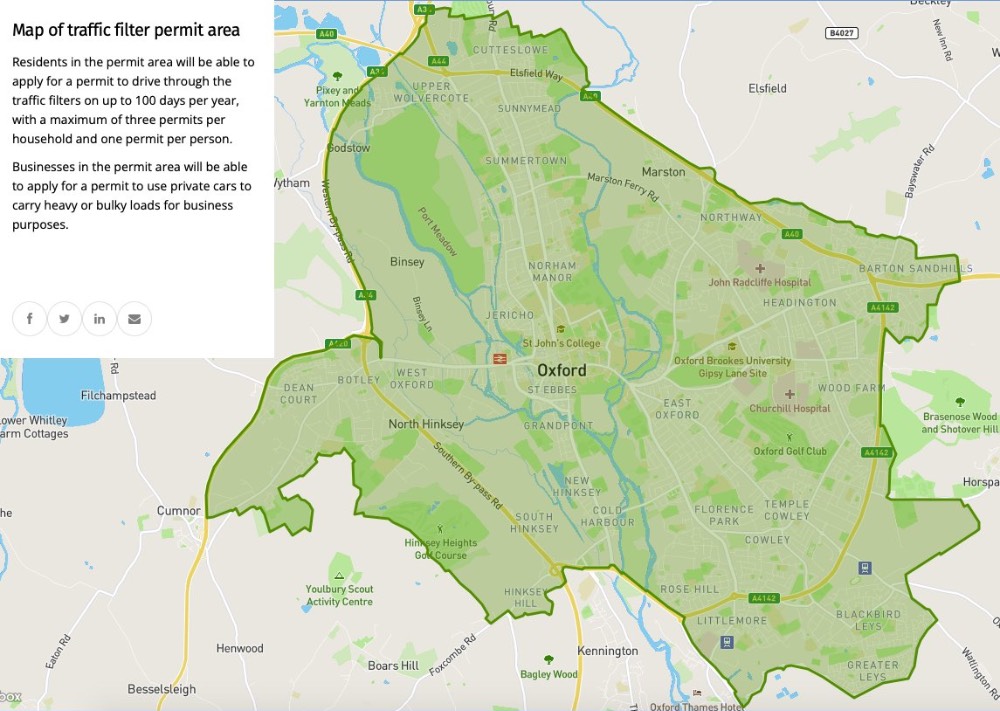 Ok, smartarse, what would you do?

Like I say: these are Hard Problems. Saying “I don’t think this will work” doesn’t mean “I know what will work”. Frankly I don’t.

But I do believe a London-style congestion charge, tightly drawn around the city centre but including the Westgate, would do a better job of reducing traffic and be much more equitable. Something like this: 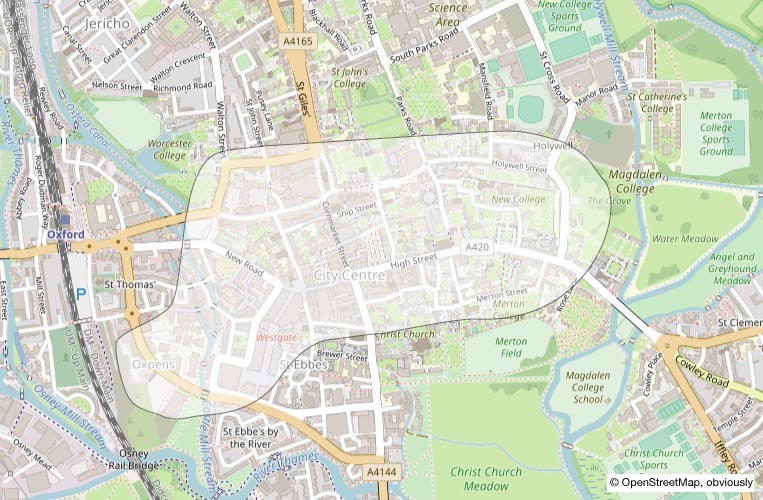 A congestion charge works by giving you a cheaper alternative to the car for every single journey. With a congestion charge, it’s always cheaper to cycle or take the Park & Ride. The traffic filters won’t do that. For most residents, the car will still feel cheapest and safest 200 days a year.

To make that alternative good, you also need protected cycle tracks, safe junctions, and Low Traffic Neighbourhoods. This combination is exactly what TfL is doing in London. OCC is at least doing the LTNs (apart from poor old Headington). It says safe junctions are on the way, though nothing has been done yet. Its antipathy to protected cycle tracks continues to baffle and exasperate me.

What I’m not sure about is whether the reduction in through traffic from a congestion charge, plus the shift to cycling enabled by safer routes and junctions, would be enough to eliminate delays to buses on the East Oxford radial roads. I also don’t know how you target the problems caused by the Westgate without getting Judicial Review-ed by its deep-pocketed owners. Hard Problems.

A single “I think you should be doing something entirely different” doesn’t move the needle on a consultation, and nor should it. I expect the plans will go forward as proposed. I don’t think they’ll work. But I would love to be proved wrong.